(For All My Digital Literary Art, See Computational Poems)

Mystery House Taken Over. With Dan Shiovitz, Emily Short, and the Mystery House Occupation Force. Includes web-based and downloadable mod kits; my Mystery House Kracked by the Flippy Disk; and other people's versions of Mystery House. Commissioned by Turbulence. 2005.

Winchester's Nightmare. The first IF "hardback." 1999.

More digital writing can be found on my poems page.

The Curveship site, curveship.com, has the system itself, a reference and other documentation, and links to publications. Here are two of the publications:

Curveship is now being used to provide text generation in the story-generation system Slant, a large-scale, international collaboration. The first publication on Slant is:

Twisty Little Passages
My Book on IF 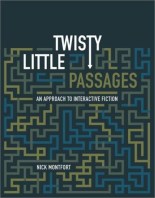 Twisty Little Passages: An Approach to Interactive Fiction. The first book covering the history of IF and proposing ways to understand how IF works. The MIT Press, 2003.

"Riddle Machines: The History and Nature of Interactive Fiction." By Nick Montfort. A Companion to Digital Literary Studies, pp. 267-282. Editors, Ray Siemens and Susan Schreibman. Basil Blackwell, 2007. [Although it is old at this point, I consider this article, which is addressed to humanities students and scholars, to be my best short, general introduction to IF.]

"Interactive Fiction Communities: From Preservation through Promotion and Beyond." By Nick Montfort & Emily Short. Dichtung Digital, 2012.

"Fretting the Player Character." Article on the concept of the PC. Second Person, 2007.

"Interactive Fiction's Fourth Era." Article on the potential for different types of narrating in IF. Originally published in Portuguese in Nada, October 2006.

"Toward a Theory of Interactive Fiction." Article on understanding IF as a simulation and through narratology. 2003.

"Face It, Tiger, You Just Hit the Jackpot: Reading and Playing Cadre's Varicella." By Nick Montfort and Stuart Moulthrop, 2003.

Twisty Little Passages: An Approach to Interactive Fiction. The first book-length history of interactive fiction of the text adventure sort, with literary and game-based criticism of important works and proposals for how to understand the form. MIT Press, 2003.

"My Generation about Talking," a talk at the UCSD Software Studies Workshop, 21 May 2008, which was accompanied by the execution of yes_voices.py.

"Ordering Events in Interactive Fiction Narratives," a paper for the Intelligent Narrative Technologies AAAI Fall Symposium , November 9-11, 2007 in Washington, DC. This covers how my system, nn, orders events so they can be narrated in different, non-chronological ways. Posted 27 August 2007.

"Natural Language Generation and Narrative Variation in Interactive Fiction," a paper for the Computational Aesthetics Workshop at AAAI 2006, July 16, 2006 in Boston, Massachusetts. This explains the architecture of the IF system I am developing. While the implementation shown in this paper is preliminary, it is used to provide some examples of how natural language generation and narrative variation can work in IF. Posted 21 May 2006.

"Toward a Theory of Interactive Fiction." Proposing concepts that allow IF to be discussed precisely as a program, a simulated world, a generator of narratives, and a game, this essay seeks to bring some insights from narratology and game studies to IF and to separate the formal aspects of IF from matters of the interactor's interpretation. Definitions of character, room, and puzzle are given, and metalepsis and other concepts from narratology, along with concepts particular to IF, are used to explain some of the unusual aspects of certain IF works. Version 3.5 (intended to be final) was posted 19 December 2003.

"Continuous Paper: Print interfaces and early computer writing." Text of talk about the material experience of Eliza, Hunt the Wumpus, and Adventure, presented at ISEA in Helsinki, 20 August 2004.

"Continuous Paper." Text of talk about the material experience of interactive fiction (and other computer writing) that I gave in the History of Material Texts Seminar, University of Pennsylvania; Posted 23 Feb 2004.

"Face It, Tiger, You Just Hit the Jackpot: Reading and Playing Cadre's Varicella." Paper about Adam Cadre's Varicella, treating it as something that must be understood to work simultaneously as literature and as a game. MelbourneDAC 2003 — Digital Arts and Culture, Melbourne, Australia, 19-23 May 2003. HTML version published in Fineart Forum 17:8, Aug 2003. (Offiline as of 2008, see an Internet Archive snapshot.) PDF from conference proceedings. Written with Stuart Moulthrop.

"Cybertext Killed the Hypertext Star" A review of Espen Aarseth's Cybertext in ebr (Electronic Book Review) 11, Winter 2000/2001. Includes an implementation of Eliza and an interactive excerpt from Deadline.

Free Advice on Reading & Teaching IF

This is all antiquated at this point...

Two starter kits for interactive fiction in Inform (specifically, Inform 6) that I put together and used when I had the chance to teach IF. In December 2005 I finally packed them up and put them online.

The Interactive Fiction FAQ, written on ifwiki, provides some concise answers for those new to IF.

Interactive Fiction Recommendations for those new to IF.

Sample syllabi for a semester-long "Workshop in Interactive Fiction" university course and for a similar one-month intensive course with some different selections.

Presentation Notes and Slides Related to IF

"On Authorship, E-lit, and Blogs." Talk by videoconference to the Atelier-Auteur (the Authorship Workshop) of RTP-DOC. 17 March 2005. Also online: Video of the talk in Real format.

"Underground Adventures: Interactive Fiction." A few slides I used in a proseminar, a one-meeting class at the University of Pennsylvania, 2 September 2003. The handout from that class, with URLs, is also online.

"Interactive Fiction as New Media." Slides shown with my presentation to Mitch Marcus's CSE 100 class at the University of Pennsylvania, Fall 2002.

"The Line / The Line: Interactive Fiction and Symmetry in Human-Computer Text Exchange." Presentation at the ACM SIGGRAPH Art Gallery, Los Angeles, 14 Aug 2001. The full text of my presentation and my HTML slides from it are both online.

"Computer Co-Authors for Fiction." Presentation at Computers and Writing 2000, Fort Worth, Texas, 27 May 2000. The abstract and the full text are both online.

Review of The Ed Report in Academic Writing. A glowing review, of course, since I wrote it and also co-wrote The Ed Report. 17 Oct 2000.

"The Tome of the Unknown Authors." Review of The Unknown (by William Gillespie, Scott Rettberg, Dirk Stratton, et al.) in Technology Review, May-Jun 2000.

Purple Blurb, a series where authors read and discussed their digital writing (including IF) at MIT.

Reading notes, "The Art of Code" by Maurice J. Black My notes from reading this intriguing dissertation which considers the literary turn in computer programming, and which reads Finnegan's Wake via object-oriented programming. 18 May 2005.

Reading notes, Composition No. 1 by Marc Saporta. My notes from reading this novel (printed on 150 loose pages) in English translation in December 2002.

"DAC 2000: A Choose-Your-Own-Trip-Report!" Some comments on Digital Arts and Culture 2000, from both interactive fiction and hypertext fiction perspectives.

Digital Intercourse. A reading of interactive fiction and hypertext fiction at the New School on 19 November 2001.

A Night at the Cybertexts. A reading that took place during DAC 2001 at Brown University on 27 April 2001.

The Boston T1 Party: Electronic Literature in Performance. A reading that took place at the Boston Public Library on 25 April 2001.

The IFNYC Web page with information about a reading and discussion group that met monthly from November 1999 - June 2000. Links related to the reading selections are available on that page.

An e-List, that is, a list of bunch of computer literature works I read from for a UB literature class in early May 2002.