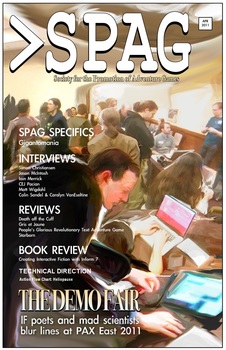 SPAG (The Society for the Promotion of Adventure Games) #60 is out – the latest issue of the long-running interactive fiction newsletter. On the cover, a figure in a dark sport coat looms, his face a grim rictus as he hunches toward some computer or iPad. I don’t recall seeing this sinister individual at the festive and very enjoyable IF Demo Fair, which Emily Short organized at PAX East, but I do recall seeing happy interactions of the sort depicted in the rest of that scene.

The new issue includes writeups of the work exhibited at the Fair. This includes some comments on my IF system Curveship, which I showed off at the Fair and spoke about the following day. There’s some discussion by Emily Short and Jacqueline A. Lott. These, along with the discussions of Curveship at PAX East and the Second International Conference on Computational Creativity in Mexico City, will be helpful as I continue development of the system.