“Code of Best Practices In Fair Use For Poetry” has just been released by the Harriet Monroe Poetry Institute. “Poetry” as a cultural force, in the popular consciousness, is very traditional, but poets of course also have undertaken some of the our most unusual, avant-garde writing. The document gives a hint of the wide sweep of poetic practice while showing that poetry has long played host to quotation, parody, and other remixological practices. And the “Code” achieves its main purpose of outlining common sorts of writing and use that fair use seems to cover, as poets see it. I’m glad to have been involved in some of the meetings that led to this document. I hope it will helpful us continue the discussion about alternatives to cultural lockdown, bringing in the perspectives, not of industries, but of the creators of different sorts of culturally significant work.

The “Code” was compiled in collaboration with American University’s Center for Social Media and its Washington College of Law. Those who attend AWP can pick up free printed copies of the document; The PDF is online now.

Two of my talks on this program:

have recently come online. I’m currently studying this program deeply and writing a single-voice book about it with many other authors.

My earlier talk, given jointly with coauthors Jeremy Douglass and Casey Reas on July 23 of last year, was “Studying Software by Porting and Reimplementation: A BASIC Case” at USC. As of yesterday, video of it is online with the rest of the conference proceedings from Critical Code Studies at USC.

More recently, on January 10, I spoke about the program at UC Santa Cruz. My talk “Line of Inquiry: Many Authors Explore Creative Computing through a Short Program” is available on video in six parts. Part 1 will let you link on to the rest.

Last night I projected words to accompany music at a local lounge. This practice does not seem have an established name – does it? Please let me know if you’re aware of the conventional term. I have heard the phrase “text jockey” used. I’ve also come up with some other terms that don’t seem to fit perfectly. In a sense, this is VJing, but it’s also a practice that is compatible with VJing, since words can be projected in a subtitle-like fashion on moving images. 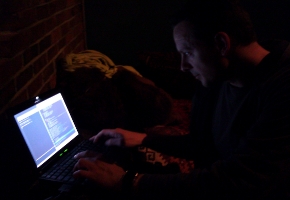 Using a small bit of Python code and pyglet, I put a number of texts up a word at a time in very plain and uniform typography. Each successive word appeared centered on the same point as the last in a rapid, serial, and visual manner. Sometimes I showed several texts in juxtaposition, sometimes just one. I thought the combination of the Advanced Dungeons & Dragons Monster Manual and the text of Beckett’s Rockaby was particularly nice. The Unabomber manifesto and the Timecube website were utilized, as were Moby Dick, a Roberto Bolaño story, some altered versions of Little Red Riding Hood, a poem by Harry Mathews, and a few pieces I put together that drew randomly from word sets to confuse gender stereotypes and our notions of otherness. One of the people who came thanked me and said that he wasn’t expecting to spend the evening reading from great books, but that it was pretty cool.

My thanks to DJ Flack & Wayne and Wax, who very kindly invited me to join them.

This year’s MIT Mystery Hunt was won by my intrepid friends on team Codex Alimentarius early Sunday morning. I’m glad I had the drive (the 5.25″ drive, to be exact) to help them as they solved one of their puzzles.

You put yourself on something unseen.
Then, you are unable to take a look at something because you are not in the world.

While attempting to upgrade to a new Ubuntu distribution Sunday late night, I managed to slag nickm.com. I don’t mean that I insulted my server; rather, I irrevocably converted it into a molten heap, or at least the software equivalent.

The bright side of such failures (perhaps the light is provided by the glowing and otherwise useless material that used to be serving my website) is that one learns how good one’s been at backing up. In my case, I actually had recent copies of almost all of my data stashed away: not only important files, but also the mysql database. That means that after about 12 hours of reinstalling and once more setting up my server, most of it was up and running.

The one thing I didn’t have, due to a permissions/backup quirk, was the image directory for this blog. I had a very old copy of the directory, but had stopped storing local copies of blog images a while back, trusting in my backups that didn’t work. Obviously, I’m to blame; of more general interest than my culpability is what I tried in an attempt to find the missing images, and what did and didn’t work:

FAIL: The Internet Archive Wayback Machine. As best as I can tell, the Wayback Machine’s acquisition apparatus has been switched off since mid-2008. Nothing of Post Position is available at the Internet Archive – no trace of it. There’s no record of Grand Text Auto since mid-2008, either. I found only the tiniest hint of activity in recent months. The major, bustling site Reddit has exactly one image available for all of 2010. The IA Wayback Machine was better than nothing, but was never searchable; now it seems to be over.

SEMI-FAIL: Google. Google’s cache had/has a very small number of my images – only the ones I have recently posted. Perhaps Google cached my images from three months ago and longer in the past, too, but has removed them? The cache is nowhere near a snapshot of the Web, in any case. Google also keeps smaller copies of my images within its image search. All images there are degraded by being reduced in size and converted to jpg, even the smallest of images. This at least allows people in my situation to see what they’ve lost, though. Of course, Google’s cache is not meant as a serious archival tool, so recovering at least few recent files from there was nice.

FAIL: Bing. Yes, I checked the Bing cache (used by Yahoo) also. It doesn’t seem to cache images at all.

WIN: The Electronic Literature Organization and Archive-It.org. After I had more or less given up, and after I had started to recreate images to fill the gaps in blog posts, I remembered that Archive-It, thanks to the work of the Electronic Literature Organization, has archived not only works of electronic literature but also contextual information, such as e-lit authors’ websites. Their archives are searchable, too. Archive-It and the ELO did keep copies of material from nickm.com, and succeeded in preserving the images that I’d lost, outdoing the Internet Archive as well as Google, and Microsoft. (Again, I did get some copies of recent images from Google, and neither that cache nor Bing’s is intended as an archive.) Scott Rettberg did a great deal of work on the ELO Archive-It project, I know, which was undertaken by the ELO when Joe Tabbi was president. Matt Kirschenbaum worked to connect the ELO with Archive-IT, and Patricia Tomaszek did much of the implementation work. A particular thanks to those ELO folks along with the others who worked on this project.

Online archives don’t exist as backup services, of course, but it’s not absurd to see if they can help individuals and organizations in times of crisis – in addition to performing their main function of serving scholars and helping preserve our cultural memory. Given the intricacies of backing up, data storage and formats, and technological change to new systems and platforms, this is sure to be an important secondary function for the digital archive.

Please let me know if you find anything missing or broken here at nickm.com.