Just a quick note that ICCC-11, The Second International Conference on Computational Creativty, is going very well here in Mexico City. We’ve had five sessions of brief presentations followed by lengthy discussions among the panelists and members of the audience. The research into computational creativity that is represented here includes work on theory and on creativity in many of the arts. We’re looking forward to this afternoon’s keynote speech by George E. Lewis.

Here’s the abstract from a presentation I gave yesterday, from my pedestrian stance as a non-dancer, at a high-energy workshop on dance technology:

Of all the ways that computing can connect to dance, one of the simplest but also most pervasive is seen in the animation of dancing bodies on screen. To inquire about how computers have done this sort of virtual dance over the decades, and how it relates to interactive games that require the player to dance, I begin by considering very simple digital media objects that represent dance. The first is a non-interactive BASIC program from the 1982 _Commodore 64 User’s Guide:_ “Michael’s Dancing Mouse.” Comparing this to a dancing computer animation from the decade after — the dancing baby, which was one of the first viral animations or videos online — is instructive in considering the way digital media developed and whether or not the computing concept of dance developed. I then turn to focus on one game originally for the arcade and one home video game: Konami’s _Dance Dance Revolution_ and Harmonix’s _Dance Central._ In examining these systems, I try to articulate the model of dance that underlies them and to understand what aspects of dance are foregrounded and which are left aside. Finally, I consider how well the computer can dance (in this one narrow sense of displaying an animated dancing figure) and how this compares to the computer’s ability in other domains, including the other arts.

My thanks to Mary Flanagan, Aden Evens, and the others at Dartmouth who put on the digital poetry symposium last Friday (April 15). I was very glad to participate along with Marjorie Luesebrink, Braxton Soderman, and my collaborator Stephanie Strickland. With Stephanie, I showed, discussed and read from our “Sea and Spar Between.” I also presented some of my smaller-scale poetry generations, including words from the ppg256 series, “The Two” and its French translation by Serge Bouchardon, and “Taroko Gorge” and its transformations by Scott Rettberg and J. R. Carpenter.

Mary has a writeup of the symposium on her blog, Tiltfactor, describing the excellent work that my fellow presenters showed. I was familiar with and pleased to hear more about the projects that Margie and Stephanie showed; it was great to see the work in progress, a provocative textual platformer, that Braxton was doing with Daniel C. Howe and that he showed.

As the call for papers for ACM Creativity and Cognition explains, we’re only two weeks away from the deadline. Papers, artworks, and proposals for tutorials and workshops are all welcome!

On April 2, “ClubFloyd,” a group of players of interactive fiction, took on my Book and Volume, which was released on the [auto mata] label in 2005. They played the game on ifMUD and conversed online about it. Reading the discussion was a treat for me. Not because every bit of it was positive – I found out about some bugs. For instance, since the current time is only reported in the status line, it can’t be easily determined when playing the game via a bot on a mud, the way this group was playing. But the feedback from these sessions was very useful, and would have been hard to come by otherwise.

I think some of the ClubFloyd players had fun, although I’m not exactly sure how to interpret statements such as “This game boggles the mind.” In any case, the transcript of ClubFloyd’s play is online.

Jörg Piringer has a sweet new video of every displayable character in Unicode, one character per frame.

On netpoetic.com, you can used to be able to find Piringer’s discussion of this piece. Now, check his page on Unicode. 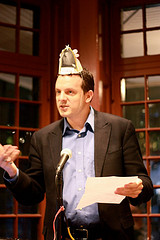 Video and audio of Oulipolooza, a festive tribute to the Oulipo in which I participated, is now online. The event was held on March 15, 2011 at the Kelly Writers House at Penn and was organized by Michelle Taransky and Sarah Arkebauer. Speakers were:

It was quite an honor to be part of this group, which included one of my Ph.D. advisors – Gerry Prince. I may have been the least distinguished Oulipo scholar among these speakers, but I tried to make up for that by being the only one to wear a party hat.